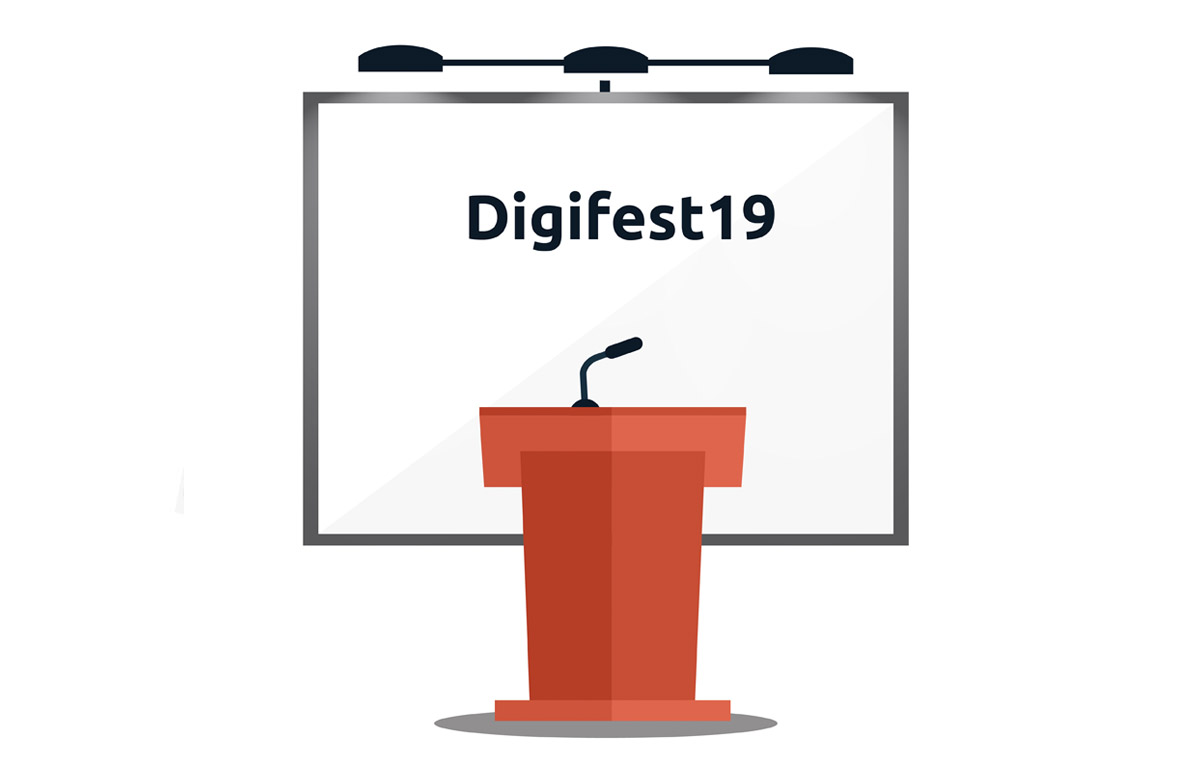 Shaping education for a hyper-connected world.

Digifest is the leading annual edtech event in the UK. In fact, during this year’s opening keynote it was announced that Digifest has now become the largest edtech conference in Europe. Digifest brings together academics, educators, technologists and future-gazers to pose as many questions as it does answers. It’s a high-energy affair, run over two days with multiple session strands running simultaneously. The conference itself is filled to the brim with thought-provoking keynote sessions, super-fast 15-minute lightning talks, tech demonstrations, workshops, networking and semi-autonomous robots wandering around the conference hall.

Dr Anne-Marie Imafidon (@aimafidon) has a huge string of accolades to her name (see a ridiculous list of achievements here). She was child prodigy, passing two GCSE exams at the age of 11. By 17, she had started a Master’s degree at Oxford University and became the youngest ever graduate at level 7… She also speaks six languages and has worked on more projects then you could shake a stick at.. One super-smart cookie.

Dr Anne-Marie Imafidon is the Creator, CEO & Head Stemette. During her presentation, one element that really struck a chord (and for me was the first time hearing it) was the idea that STEM as a field should include Art. Which would actually make the field STEAM. Dr Anne-Marie Imafidon’s mission is to inspire the next generation of females into Science, Technology, Engineering and Maths. Her talk was inspiring and set the tone nicely for the rest of the conference.

2019’s startup competition entries pitched their new and innovative early-stage ideas. Participants could vote for their favorite and the winners would be supported by JISC in developing their concepts. You can recap the pitches here. JISC continuously run competitions for ideas. The Edtech challenges attempt to explore pertinent issues across the landscape of education technology. Earlier this year, myself and my illustrious colleague @mike_ewen‘s idea for the future of VLE’s without a screen was shortlisted by JISC. A full write up will appear soon. You can find out more about Edtech challenges if you are interested in entering a challenge competition. They are open to anyone with a good idea (staff, students or any interested individuals or teams) but you must be working, living or studying in the UK and 18 or over to submit an idea or attend events.

Mega-metacognition – learning how to learn in a digital age.

Firstly, I choose this event because it sounded cool….Without even knowing what Mega-metacognition is. Let me answer that first. Metacognition can take many forms; it includes knowledge about when and how to use particular strategies for learning or problem-solving. There are generally two components of metacognition: 1) knowledge about cognition and 2) regulation of cognition. The workshop itself was interactive and informative. The presenters used Meetoo polling software to pose group questions and show confidential responses. The session attempted to spark ideas for how to utilise technology to support project-based, enquiry and active learning. ….Embarrassing side note: One of the group activities involved delegated tasks. Mine was to reach out to my network for a definition of Mega-metacognition.. I diligently reached out to the community and received ZERO Responses. You can view the slides from Mega-metacognition Here.

Digital storytelling for all – Gordon Duffy-McGhie.

I was particularly interested in this session. Gordon started by describing his problem. Course work was organised in hierarchical folders, students didn’t access them (before or after his sessions – he knew from the analytics). Gordon enrolled on a MOOC – How to develop courses using digital storytelling and he tried it with his students. His talk described the journey, resources he used and fundamentally, the philosophy of storytelling in education….and in fact the importance of storytelling in human psychology. Ultimately stories help people conceptualise and remember easier than dry facts. He talked about his approach with video and pechakucha. Pechakucha is a Japanese presentation style in which 20 slides are shown for 20 seconds each (6 minutes and 40 seconds in total). The format, which keeps presentations concise. You can view all the slides for the Digital storytelling for all presentation.

2019 Closing Keynote Dave Coplin – The rise of the humans.

The closing keynote of the day was left to Chief Envisioning Officer Dave Coplin. Dave’s swagger and confidence made him easy very easy to like. He started his keynote by saying his wife describes his job as “talking bolloc** about the future”. Dave Coplin has over 25 years’ experience at top-flight tech companies (more charismatic Dave here). His message was, in the future the opportunities are around “humans plus machines” not “humans versus machines”. “We continue to think about skills and work with a mindset that was forged in the industrial fires of the 19th century and as a result, we are in danger of preparing students for a world that actually no longer exists”. You can also see a video Dave Coplin talking about the skills required in the future world of work. As the first day of the conference closed, I felt enthused, excited and slightly exhausted with sore feet (I foolishly wore new shoes). At the end of the first day, I was left with one very striking thought ricocheting around my mind….

85% of jobs that will exist in 10 years time…Have yet to be invented.

Now back to the hotel, change and out on the streets of Birmingham to find a delicious curry. We also discovered a secret gin bar near the canal…